Communities In Schools of Jacksonville staff and Americorps volunteers celebrated the achievements of some our most outstanding students who participate in the AmeriCorps Literacy Division at the Unlocking Potential to Greatness ceremony.

AmeriCorps alumni and TEAM UP Project Manager Wade Johnson opened the event with his original rap, "I Can, " which has become the anthem for students participating in Duval Reads.  With the crowd energized and excited, student leaders from Hogan Spring Glen Elementary led the audience in the Pledge of Allegiance.  These students were each awarded a medal for their exemplary leadership in and out of the classroom. 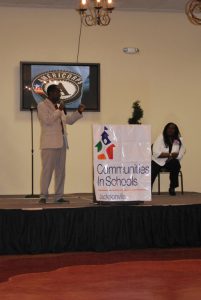 Literacy Director, Carolyn Lynn, led the event, welcoming the crowd and acknowledging the dedicated volunteers, staff, and school principals who make the Duval Reads program possible.  CEO of Communities in Schools of Jacksonville, Steve Gilbert, then spoke to the importance of literacy, saying that "you have to learn to read before you can read to learn."

The audience also had the pleasure of hearing from keynote speaker Vincent Taylor, an educator in the Duval County School District as well as author of the CORNBREAD book series.  Taylor explained that he, like many in the Duval Reads program, had a tough time in school, especially in reading.  He praised the students being honored for their perseverance and hard work, ending with the excitement he felt to see what they would do in the future.  Mr. Taylor brought books from his series to give to the awarded students, and the energy and excitement he brought to the room was infectious. 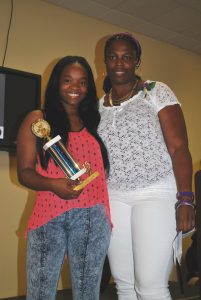 Awards were given to students, nominated by their tutors, for the achievements of Most Improved Student, Most Outstanding Student, and Student of the Year.  The accomplishments of those honored were incredible, from moving up more than two grade levels in just one school year to increasing their CGA score by 52 points.  Special congratulations go to Caden Lembric, Zakia Dowdell, and Shekel Smalls for winning Student of the Year at their respective schools.  These three showed tremendous improvement and growth, exemplifying the success possible within the Duval Reads program.

Congratulations to all the awardees at the 2015 Unlocking Potential to Greatness Ceremony! Keep up the good work!